Apple strudel is more than a dessert, it's a way of life!

To be fair, apple strudel is not an Original German dessert. The traditional Viennese Apfelstrudel is an Austrian classic. Nevertheless, it is super popular in Germany, especially in Bavaria. And personally, I believe it should be popular all around the world.

Although I like to bake a lot, I have always believed that only experienced grandmothers can make strudel dough themselves. In my memory, my grandmother's Viennese apple strudel was always incredibly complicated and delicate to make.

I'm glad that I tried it myself now! Okay, with the help of my grandma. Of course, an apple strudel recipe is not an easy sponge cake recipe where hardly anything can go wrong.

But being able to make apple strudel yourself without frozen puff pastry or other helpers is worth the "effort". 🙂

I hope to get one or two of you to dare to try this basic strudel dough recipe. I took pictures of the last baking with grandma as step-by-step instructions for apple strudel. Hopefully, this makes the preparation easier to understand.

The recipe is a kind of hermaphrodite: a mixture of an original Viennese apple strudel recipe with strudel dough pulled out and my grandma's recipe. Its alternative is roughly taken from the book "Die Wiener Mehlspeise" from the 1960s.

However, we do a lot of things differently than indicated in the book. The strudel dough recipe requires no sugar and is therefore suitable for spicy alternatives such as vegetable strudel, as well. Topfenstrudel as well, South Tyrolean apple strudel with short pastry as well as the puff pastry alternative.

How to make the Apple Strudel

The basic strudel recipe begins with the preparation of the dough, which must rest for half an hour. I recommend using (double-) thick flour for this, somewhat coarser than regular flour, but finer than semolina (alternatively type 550).

Meanwhile, you can prepare the filling. Traditionally, it consists of apples, cinnamon, lemon zest, possibly rum, almonds, pine nuts, or hazelnuts. My grandma also uses breadcrumbs roasted in butter. They not only taste delicious but also absorb the moisture of the baked apples.

Here are some pictures of the preparation:

Cinnamon, sugar and the matching apple varieties for the apple strudel filling
As apple variety for the apple strudel, my grandma and I recommend fruits from our own garden. Or, if not available, e.g. Braeburn or Elstar, which in Germany usually come from South Tyrol (For our overseas readers: South Tyrol is the largest closed cultivation area for apples in the EU. The best thing about it is that most apple farmers are small family businesses). Basically, however, apples that I like - no matter which variety - can also be used in strudel.

The strudel dough is first rolled out and drawn into shape with the hands in a very thin layer. Grandma always says that you have to be able to read a newspaper…

Apple pie with shortcrust, raisins, and frosting is a beloved classic from Grandma's bakery. For us, one of the best apple pie recipes ever!

Once the topping is spread, the strudel is rolled up with the help of a kitchen towel. Close it and spread the outside with egg yolk. Then, bake the apple strudel until golden yellow. So much for the short version.

If it has to be quick, you can also buy strudel dough and use only the strudel filling from my recipe. 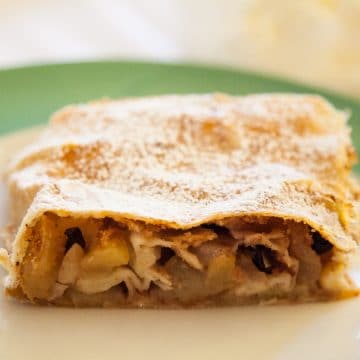 Classic apple strudel that is not that difficult to make with a little practice and this step-by-step guide. It is best to make 3 large strudels at once and freeze them in portions.
Prep Time30 mins
Baking Time40 mins
Waiting Time30 mins
Servings: 3 big strudel
Calories: 1183kcal

For the strudel dough

For the filling or coating

In case you are wondering what the differences are between the various types of apple strudel, here is some more information: In South Tyrol strudel is made almost exclusively with puff pastry or short pastry. Known as the "Südtiroler Apfelstrudel". The latter is of course easier, because homemade puff pastry needs some experience and time.

In addition, there is the alternative I described with the puff pastry, which is the characteristic of the Wiener Apfelstrudel. Under whatever name you choose: Dare to make the apple strudel yourself! Have fun baking my recipe 🙂

You like German recipes? My delicious and easy German Apple Sheet Cake might be for you then! Or what about a German Butter Cake with Almond Topping?